Fixed wireless access (FWA) is hot among service providers worldwide, according to Ericsson’s 2021 Mobility Report, which was published today.

About 72% of all service providers are now offering FWA, as of April 2021. And connections are forecast to exceed 180 million by the end of 2026, accounting for more than 20% of total mobile network data traffic globally.

Ericsson defines FWA as “a connection that provides primary broadband access through wireless wide area mobile network enabled customer premises equipment. This includes various form factors of CPEs, such as indoor (desktop and window) and outdoor (rooftop and wall mounted). It does not include portable battery-based Wi-Fi routers or dongles.”

FWA was especially propelled by the Covid pandemic because people immediately needed better home broadband connectivity. “FWA is, in many cases, the quickest alternative to meet this demand,” stated the Mobility Report.

Ericsson looked at the retail packages offered by service providers worldwide and found that out of the 311 service providers studied, 224 had an FWA offering, which represents an average of 72% globally. Service providers’ adoption of FWA offerings has increased by 12 percentage points during the last six months, and more than doubled since the first measurements in December 2018. 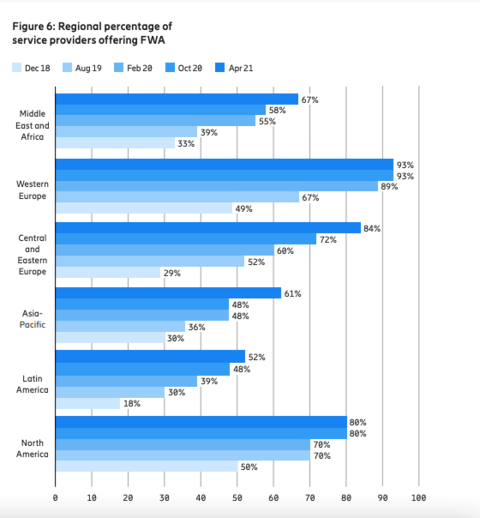 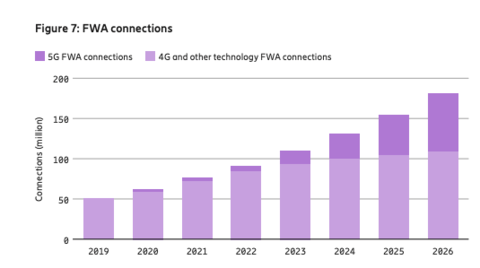 In addition to the need for better broadband driven by the pandemic, FWA is also seen as an increasingly cost-efficient replacement to fixed services such as DSL, cable and fiber. And governments are helping to fuel the growth of FWA through programs and subsidies, as they scramble to close their digital divides.

Ericsson said it had to deal with “limited reporting of FWA connections, combined with varying FWA definitions,” but it estimates that there were more than 60 million FWA connections by the end of 2020. This number is forecast to grow more than threefold through 2026, exceeding the 180 million connections threshold.

MaxComm Taiwan has launched a variety models of 4G/5G FWA and FWT. Please take a look at our web site at : https://www.4gltecpe.com/5g-cpe-router.htm

2021-06-18
Back
This site uses cookies to collect the necessary user browsing behavior so that we can provide you with a better browsing experience. Browse this site, which means you agree with "online privacy declaration."
× Close